Installing an attic ladder can be intimidating. From where to locate the door (where to cut the hole), to manhandling the door unit, it’s not a relaxing job.

People think this has to be a two person job, but it isn’t so long as you are smart about it.

The key to making it a one-person job is to use a ledger board to support the door unit.

You can cut the hole and push the unit into the attic through the hole. The tricky part is installing the door securely and then being able to climb out of the attic. You will typically cut a hole 54″x 22.5″. You will frame a box at the short ends with the same dimensional lumber that is at the joists. At the short sides of the rectangle you will screw a ledger board (use a 1″ x 4″) so that only about 3/4″ inch of it extends into the opening.

You will do this from below to create a lip that the unit rests upon as it is installed.

If you extend more of the boards into the opening, then the door won’t be able to open from above and you will make this a two-person job because someone will have to remove the ledger boards from below.

Once you have the ledger boards in place, set the attic ladder unit onto them.

These will be the only things supporting the ladder until you secure it into the framing. There are recommended locations on the ladder to drive nails or screws into the ladder and the surrounding framing. Once it is secured, you should be able to push the ladder open and climb down. 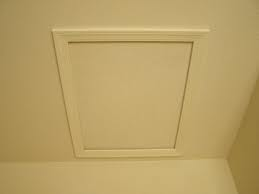 Many people like having access to their attic via an attic ladder. You don’t need an attic ladder unit to gain access though. In fact plenty of people will cut an access hole through the ceiling and just use a regular ladder to get up there. If you decide to go that route, know a couple of things. Cutting a hole in your ceiling will breach the fire rating of your ceiling. Many people still choose to do this for the added storage space.

If you choose to cut an opening, you will install trim molding around the perimeter of the opening. The purpose of the trim is two-fold. First, the trim provides an attractive finish to the cut. Second, the trim acts as a ledge for the drywall ceiling piece to rest upon when you don’t need access into the attic.

Use trim molding that is wide enough not only to  cover the rough cut, but also to extend far enough into the opening to that the drywall has plenty of room to sit and not fall out.

People typically cut along the width of the ceiling joists and then form a box by installing two 2”x4”s  to make the box. In this way, you have something to nail into to hold the trim in place. Make sure that when you install the trim, you hit the ceiling joists with the nails, otherwise the weight of the drywall will push the trim out and the trim and drywall cut-out will fall to the floor.

Request Service Online and Receive $25 Off

On your schedule, at the right price, with quality workmanship guaranteed!

*Cannot be combined with any other offer.

Las Vegas One Stop Shop for all your Home Service Projects!